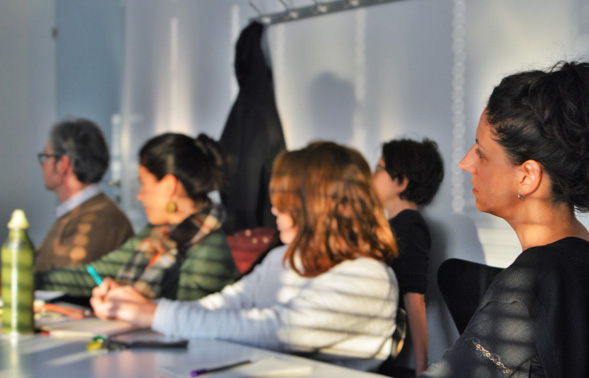 From October 2020, a new editorial collective took over the EASA book series from the previous editor Aleksandar Boskovic, who successfully curated the series for two terms. Since its establishment in 1992, the book series has been showcasing the work produced by members of the Association. The series has been published by Berghahn Books since 2003 and includes both edited collections and monographs. Annika Lems, Sabine Strasser and Jelena Tošić want to continue expanding the book series’ key role in fostering and showcasing cutting-edge work.

Living Water, an integral part of Pavel Borecký’s PhD dissertation at UNIBE, was selected to “Testimonies” competition at 24th Ji.hlava IDFF (October 27-November 8). The film is an atmospheric journey into the clash between the state of Jordan, agricultural businesses and Wadi Rum indigenous communities over the last abundant source of drinking water.

Episode of the Society for Cultural Anthropology podcast by Dr. Darcy Alexandra and Dr. Ather Zia

In this episode of the Society for Cultural Anthropology podcast, Dr. Darcy Alexandra and Dr. Ather Zia discuss poetry in relation to anthropology, answer questions about style and method, and read examples of their ethnographic poetry. Dr. Alexandra discusses her poems that draw from her work in El Salvador and the U.S.-Mexico border, which were awarded first place in ethnographic poetry by the Society of Humanistic Anthropology.

The Hospital Multiple : New Somatosphere Series by Janina Kehr and Fanny Chabrol with an introduction on speculative infrastructures and the ethnographic possibilities of grasping hospitals otherwise.

Review of Michael Jackson's book "How Lifeworlds Work: Emotionality, Sociality, and the Ambiguity of Being“ (2017) (PDF starting at page 35).

Why the World Needs Anthropologists

This Special Issue contributes to the debate on land grabbing as commons grabbing with a special focus on how the development of state institutions (formal laws and regulations for agrarian development and compensations) and voluntary corporate social responsibility (CRS) initiatives have enabled the grabbing process. It also looks at how these institutions and CSR programs are used as development strategies of states and companies to legitimate their investments (Anseew et al 2012, Lavers 2012, Schoeneveld and Zoomers 2015). This Special Issue calls for contributions analyzing how these strategies are embedded into neo-liberal ideologies of economic development (Escobar 2010, Haller 2013). We propose looking at James Ferguson’s notion of the Anti-Politics Machines (1990, 2006) that served to uncover the hidden political basis of state-driven development strategies. We think it is of interest to test the approach for analyzing development discourses and CSR-policies in agrarian investments. We argue that these legitimize the institutional change from common to state and private property of land and land related common pool resources (Haller ed 2010), which is the basis of commons grabbing that also grabbed the capacity for resilience of local people.

Valuation Struggles: Rethinking the Economy in Times of Crisis. A Conversation with Susana Narotzky, Patrícia Matos and Antonio Maria Pusceddu.

In the midst of a seemingly never ending pandemic crisis, that deeply affects economies worldwide, “Valuation Struggles”, an interview by Corinne Schwaller, Gerhild Perl and Janina Kehr with members of the ERC-project team „Grassroots Economics“ published in Tsantsa, reveals timely insights into contemporary economic anthropology. It dialogically addresses key concepts and arguments that Susana Narotzky, Patrícia Matos and Antonio Maria Pusceddu have discussed during the 2019 “Anthropology Talks” of the institute, such as the interrelation between “grassroots economies” and “grassroots economics”, “geometries of knowledge value”, “class”, and “crisis“.

In her new review article «For a more-than-human public health”, published in Biosocieties, Janina Kehr discusses two recent books on zoonoses, that is infectious diseases that can be transmitted from animals to humans. She sensitizes us to the fact that mass-scale public health measures taken against novel zoonoses as Covid-19, like disposable masks or plastic items, might well produce yet poorly understood side-effects on the environment and interspecies relationships in the future. These should be taken into account by pushing the One Health approach towards a more-than-human public health framework.

The Bureaucratic Production of Difference. Ethos and Ethics in Migration Administrations

In the context of the ever-increasing political problematization of migration in Europe, agencies charged with migrant administration create diverse categories of difference to distinguish between the »deserving migrant« and the illegal one: They assess the detainability or the credibility of asylum seekers, the danger posed by Islamic organizations, and make situational decisions that determine whether migration or labour law applies to individual agricultural workers. In this book, each chapter analyses how organizational interpretations of the common good shape bureaucratic practices. Together, these ethnographic analyses reveal how migration policies in different European countries take shape in administrative practice.

Intercultural, interdisciplinary, and transdisciplinary research interfaces confront researchers with considerable challenges. Towards Shared Research portrays how scholars from different disciplinary and geographical origins and at various academic career stages strive for a more inclusive and better understanding of knowledge about African environments.

The book is addressed to researchers, facilitators, and policy-makers to make a case for participatory and integrative approaches resulting in systemic and co-created analyses.

"Pursuing the Perpetual Conflict: Ethnographic Reflections on the Persistent Role of the “Terrorist Threat” in Contemporary Peru."

"Pursuing the Perpetual Conflict: Ethnographic Reflections on the Persistent Role of the “Terrorist Threat” in Contemporary Peru." History and Memory 31, no. 1 (2019): 59-86.

Migration as Survival. Withheld Stories and the Limits of Ethnographic Knowability

Transfigurations of Health and the Moral Economy of Medicine. Subjectivities, Materialities, Values

Ecstasy: A review of two recent exhibitions on consciousness-expanding experience.